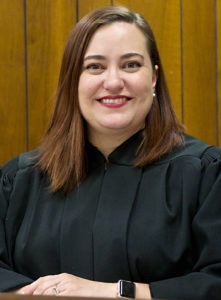 Cassandra G. Jones has served as Justice of the Peace for the East Fork Township since January 2019. She is honored to have been elected by the voters of Douglas County, and to serve as the first woman judge in our county.

Judge Jones graduated from Arizona State University’s College of Law, in the top 10% of her class. She began her career as a litigation attorney for the law firm of Brooke & Shaw, where she engaged in criminal, family, and civil litigation. She then served as the Staff Attorney for the local District Court, helping with criminal matters at the felony level and helping to establish the Special Advocates for the Elderly program.

In 2011, Cassandra established the law firm of Heritage Law Group. During her years as a private practice attorney, Judge Jones continued to work in civil litigation including advocating for children in domestic violence cases, termination of parental rights, and complex business and trust litigation. Additionally, she worked in elder law, guardianships, and probates. She has also served as an arbitrator, mediator, and justice of the peace pro tem.

Judge Jones’ years of service to justice in Douglas County have been recognized by many. She has received the following awards for her service:

Judge Jones has gone far beyond her law practice to serve Douglas County. She has served our community by:

Born and raised here in Northern Nevada, Judge Jones has been married for over 20 years to her junior high sweet heart. They are embracing the joys of raising two children in our rural, and picturesque valley.